An interesting article over at CNBC discusses what the unemployment rate really means. Economists often look past the “main” unemployment number (also known as the “U-3 rate”) to other indicators, like the U-6 rate, which many prefer because it captures those employees who work part time but would like to be working full time. What is the REAL unemployment rate? 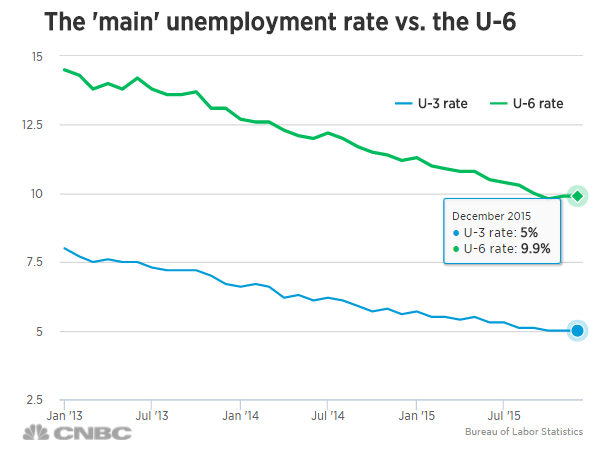 The U-6 rate is defined as total unemployed, plus all persons marginally attached to the labor force, plus total employed part time for economic reasons, as a percent of the civilian labor force, plus all marginally attached workers. In other words, the unemployed, the underemployed and the discouraged — a rate that remains to this day at stubbornly above pre-recession levels: 9.9 percent in December 2015.

The tail end of the Great Recession

The Labor Department reported this that the U.S. unemployment rate fell to 4.9 percent in January 2016, the lowest since February 2008. Despite that optimistic news, many financial experts believe the employment picture to be much less rosy. Economists point to the labor participation rate, which has shown little improvement over recent years. According to a recent Bureau of Labor Statistics estimate, there were 94,062,000 Americans not participating in the labor force in January 2016.