The Roadmap for the Washington Region’s Future Economy is a fascinating new report by Stephen Fuller, head of the Center for Regional Analysis at George Mason University. Below are some takeaways from the report, which highlights several structural changes in the Washington region economy.

One of the key points of the report is that the area’s growth rate is lackluster, to say the least. The report compared state and metro growth rates and rankings the entire nation. In 2014, Maryland ranked 37th, DC ranked 25th, and Virginia ranked 49th (with 0.0% growth in 2014). 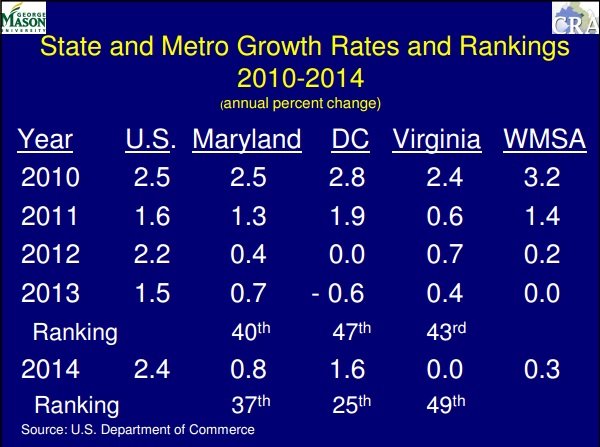 The Washington region economy is adding more low-paying jobs than high-paying jobs, and more leisure and hospitality jobs than professional and business services positions. The result is that average wages have declined the last three years in a row. And median household income has dropped by nearly $2,300 since 2009 in 2013 dollars.

“We need a different horse to ride”

The Washington area may be emerging from a “dark period” for jobs and wages. Still, “time is of the essence. We are being left behind,” Fuller says. “For many years, we have been a company town, and that company has been the federal government. We need a different horse to ride, but what does it look like? It’s going to take a while to figure out what the reinvention might be.”