In the United States today, economic opportunity remains sharply divided along racial and ethnic lines. President Obama has declared bridging the economic divide to be “the defining challenge of our time.” So why does an immense wealth gap persist in America, especially for American minorities?

“Race matters when it comes to how people experience our economy,” said Rep. Ellison. He’s right. Black wage growth and unemployment continue to hamstring black communities in the wake of the Great Recession.

According to CNN, black unemployment is 8.8%, far higher than the white unemployment rate of 4.3% or even the national average of 4.9%. “Nobody is suffering from unemployment like the African American community,” said Rep. Scott. Take a loot at the wage divide, based on median weekly earnings, courtesy of CNBC. 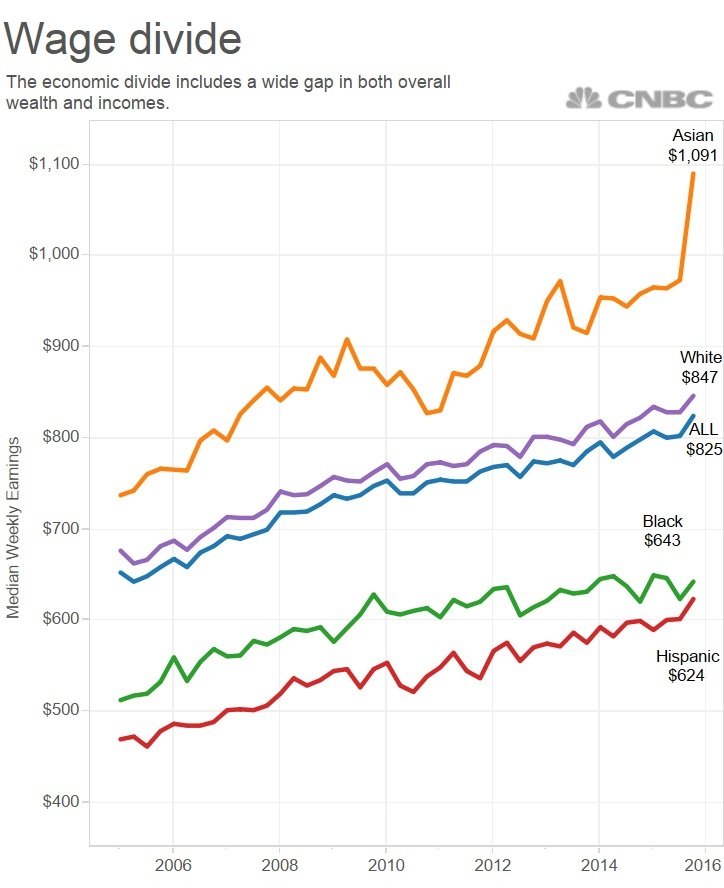 Despite major advances in the job market since the Great Recession, unemployment remains high among blacks and Latinos. In all but 15 states, the jobless rate for African Americans was 10 percent or higher in 4Q 2015. And the unemployment rate for black men between the ages of 18 and 37 is a shocking 36.5 percent.

Blacks and the Federal Reserve

That is obviously unacceptable, and Yellen’s hearing was an appropriate forum to bring these issues to light. “We have got to get the Fed to . . . put the issue of African American unemployment on the front burner,” said Rep. Scott.

The Federal Reserve has a complicated relationship with African Americans. There have only been two black Fed governors in the central bank’s 100-year history, and there has never been an African-American president of a regional branch. The Fed has also stated that it does not calibrate interest rates to jobless rates among black workers, which may or may not be an appropriate method to achieve Fed mandates. But minority unemployment is often not even part of the conversation, and that should change.

The policies leading up to the Great Recession, according to President Obama, have given rise to “an economy that’s become profoundly unequal, and families that are more insecure.” If we are serious about bridging the economic divide, should Fed policy specifically address minority unemployment? I don’t know, but I do share our President’s desire to make our economy work for every working American, regardless of race.