A Time article Why the World’s Debt Epidemic May Lead to a New Economic Crisis (free for subscribers) posits that there is an unprecedented amount of public, private and consumer debt in the world today. Specifically, there’s now $57 trillion more than before the economic crisis of 2008. The total, according to calculations by the McKinsey Global Institute, rings up to a staggering $199 trillion. Steadily increasing debt is the new economic crisis. 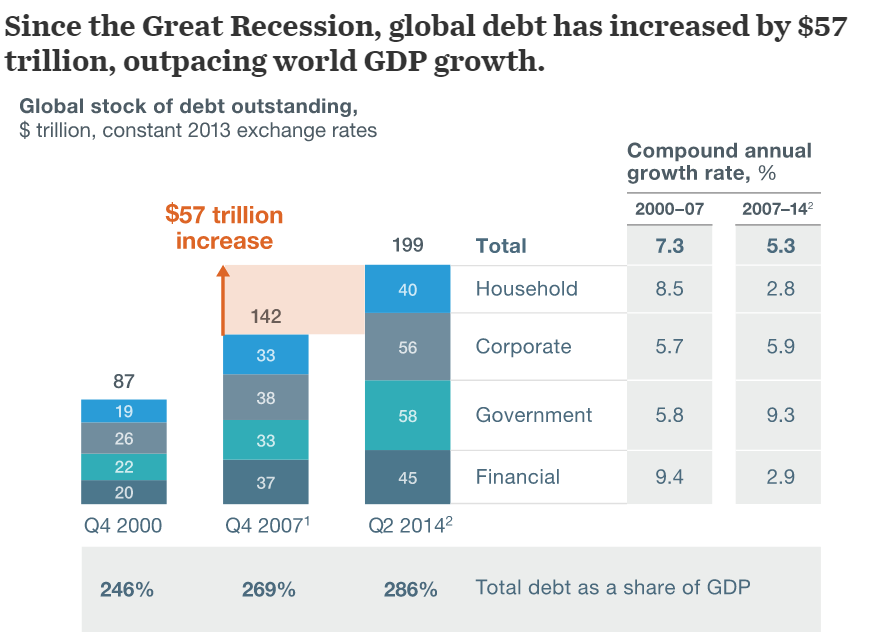 The economy needs everyone to prosper, not just the very wealthy. After all, when the rich get richer, there are only so many more cars and houses they can buy. But when wealth is more broadly shared, the economy grows more robustly.

The S&P 500 index has more than tripled since bottoming out on March 9, 2009. The stock market has had a seven-year-plus bull market, the third longest in our country’s history. Most of the stock (and housing) wealth, however, is accruing to a tiny subset of the population. The richest 20% of the population owns roughly 80% of all stocks.

If history is any indication, we are overdue for a bear market. And public debt levels have grown so much that central banks wouldn’t be able to pump cash into the system to fight another economic crisis like the one we had in 2008. In the U.S., debt is already at 104% of GDP.

Yet the U.S.’s existing tax code rewards exactly the kind of behavior the economy doesn’t need. The rich can get second-mortgage tax credits on their yachts provided they stay on them more than 14 days a year. There are tax breaks for the use of corporate jets for “security reasons.” Tax dollars help underwrite federal flood insurance in some of the richest waterfront property areas in the country, a subsidy that mostly benefits wealthy landowners.

The tax code is a problem, but housing is still the main source of debt. Consider the mortgage-interest deduction, first put into effect in 1894, mostly as a way to help farms keep their family homesteads and make a decent living. Today it has instead become a boon for the middle and upper classes.

Anyone who buys a house (or two) can deduct the interest payments as long as the mortgage (for one or both) doesn’t add up to more than $1 million. That’s a lot of subsidy. Even if someone actually needed that much house, does it follow that taxpayers should help him or her afford it? Without the mortgage-interest deduction, home prices would probably fall to where more unsubsidized folks would be able to buy them.

Moreover, household debt levels are reaching new peaks worldwide. Households have shed debt in only the four core economic crisis countries: Ireland, Spain, the United Kingdom, and the United States. In many others, household debt-to-income ratios have continued to rise and exceed the 2008 economic crisis peak levels. These countries – including such advanced countries as Australia, Canada, Denmark, South Korea, and Thailand – should attempt to avoid a property-related economic crisis like we did in 2008. To manage high levels of household debt safely, they need more flexible mortgage contracts, clearer personal bankruptcy rules, and tighter lending standards.