The racial wage gap is wider today than in it was in 1979. And according to this recent Washington Post article, student debt is exacerbating the gap. Student loans make it more difficult for to save money and accumulate assets. Targeted student loan forgiveness could narrow the racial wealth gap.

Education levels directly influence both economic opportunity and wealth creation. Earnings disparities between college and high school graduates accounted for at least 60% of the rise in wage inequality between 1980 and 2005. Not going to college is simply not an option for any young person aspiring to the middle class. Consequently, 43 million Americans across the racial and socioeconomic spectrum have taken out nearly $1.3 trillion in college loans.

The Consumer Financial Protection Bureau has also examined “the disproportionate impact of student debt on communities of color.” The CFPB specifically found that “student loan debt can trigger a financial domino effect that may prevent economic mobility.” 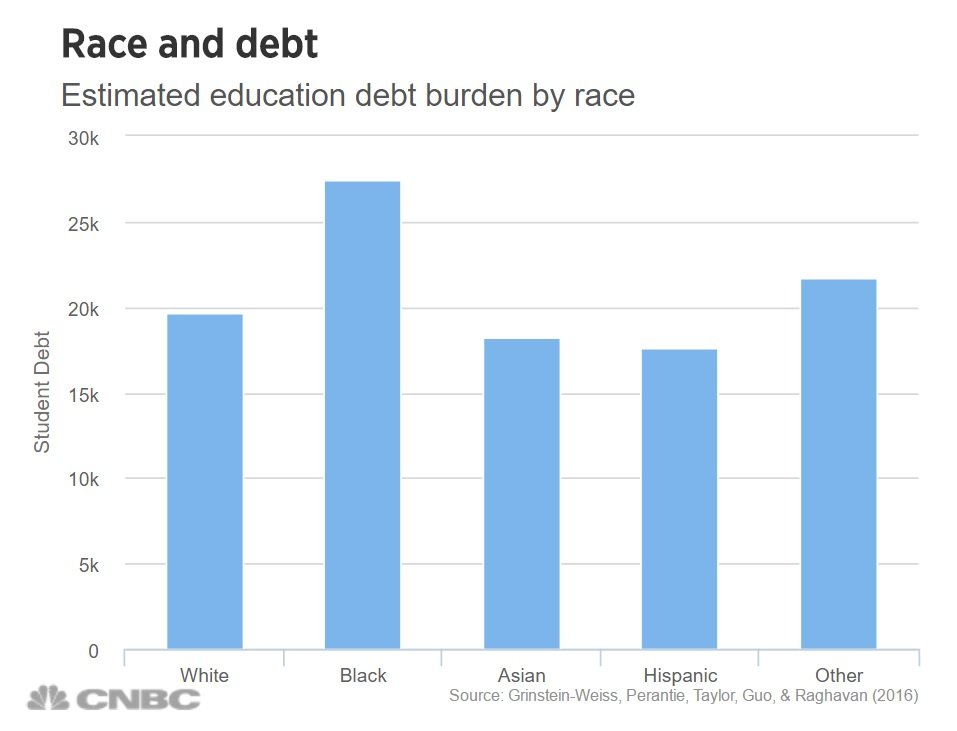 There are many, many critics of plans to lessen the enormous wealth gap that exists in America today. (“Putting the blame on the 1 percent is an easy excuse for those who have failed due to poor decision-making, poor planning, lack of skills, lack of drive, lack of sacrifice.”) Yet it is difficult to discern why a racial income gap exists for college graduates.

Even less understandable is why the gap should be allowed to exist if it can be ameliorated or eliminated altogether. A recent report found that if average black family wealth continues to grow at the same pace it has over the past three decades, it would take black families 228 years to amass the same amount of wealth white families have today. That is not acceptable. The feds should direct student loan forgiveness policies toward minorities to lessen the wealth gap.

The Department of Education needs to do a better job targeting and promoting debt forgiveness programs toward minorities. The Department of Education offers several different types of income-based repayment programs. Generally, these programs allow for forgiveness after at least two decades of payments. The plans may be skewed toward graduate students, but legally these programs are available to all.

In addition to targeted programs, allowing student loans to be discharged in bankruptcy could dramatically narrow the racial wealth gap.