Since October 17, 2005, the Department of Justice has promulgated median incomes for Chapter 7 debtors. To qualify for Chapter 7 bankruptcy, you must pass the “means test,” or Official Form 122A, Statement of Your Current Monthly Income. The higher the income levels, the more people who will qualify.

These numbers are very important. The U.S. Trustee’s Office uses the official means test numbers to sort between those who qualify for Chapter 7 bankruptcy protection and those who do not. To a household overwhelmed with debt, being denied a fresh start under Chapter 7 can have devastating impact.

Here’s a timeline of the changes to the D.C. means test numbers since October 17, 2005, when the Bankruptcy Abuse Prevention and Consumer Protection Act took effect.

There are actually four lines in this graph, although there appear to be just three.

But look at the Orange line, which represents a 2-person household. Wait. “What Orange line?” you say? 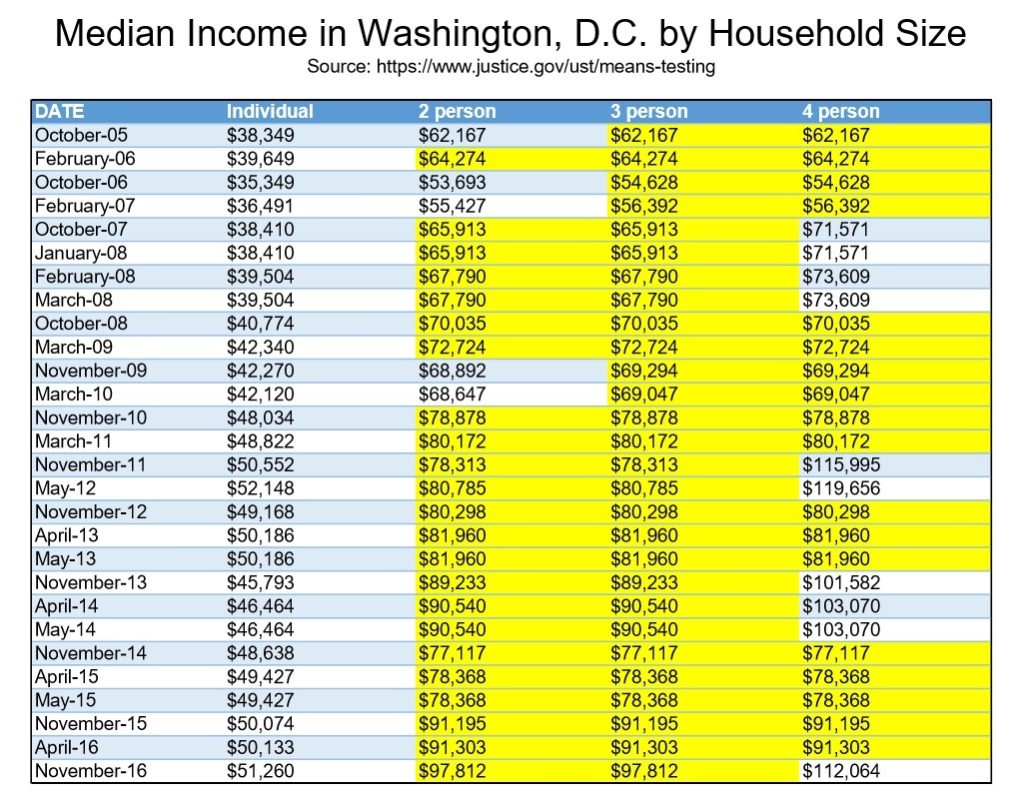 In 24 out of 28 times since the bankruptcy means test took effect 11 years ago, 2-person and 3-person households in D.C. have had the same Chapter 7 cutoff. Any household making more than those amounts was prima facie precluded from filing for Chapter 7 bankruptcy protection. In 82% of the total periodic adjustments by the DOJ to the D.C. means test numbers, an additional person in the household increased the Chapter 7 income allowance by exactly zero.

Perhaps even worse, 18 out of 28 of adjustments to income for a 4-person household were exactly the same as a 2-person household. That can’t be right. Probability must near zero that these differing household sizes produce the same incomes.

The algorithm being used to calculate means test income figures for the District of Columbia requires revisiting. The same may well be true for other jurisdictions.

The Entire Means Test is Wrong

The stated purpose of the Chapter 7 means test was to force households to repay their debts based upon perceived ability. When it comes to who will qualify for Chapter 7 bankruptcy and who will not, miscalculated means test numbers add up to a serious disadvantage to discrete but easily discernible household structures. The young married couple with a child (or two). Siblings supporting an elderly parent at home. The grandmother or aunt supporting two (or three) children on her own.

The more people in a household, the higher that household’s expenses will be. But the Chapter 7 means test doesn’t properly contemplate expenses. Instead, it considers primarily income and only minimal expenses. The inequitable denial of Chapter 7 bankruptcy to households struggling with debt can be ruinous to entire family structures. The unfortunate state of the means test numbers for the District of Columbia only illustrates the futility of reducing the complexity of everyday household finances to a single, simplistic number.