New research from WalletHub compares the average student loan debt to median income of residents in more than 2,500 U.S. cities. The research allows us to see who in the Washington, D.C. area has the highest student loan debt in comparison to income.

The following table sorts D.C. area cities based on the ratio of student debt to median income. This ratio is useful because it predicts the ability of students in a specific area to repay their student loans. The table also suggests which D.C. area residents might most be struggling with the highest student loan debt burdens.

The higher you are on the list above, the more likely it is that you are struggling to repay your student loans. Research from Citizens Bank earlier this year revealed that college graduates aged 35 and under with student loans now are spending 18% of their income on student loan payments. Even more alarming, about 60% of student loan borrowers now expect to be paying off their loans well into their 40s.

The D.C. area has three of the top 10 most educated places in the United States: Bethesda and Potomac in Maryland and McLean in Virginia. The latter two fall very near the best situated in the debt-to-income table above. The District of Columbia recently ranked dead last on the list of highest student loan debt as percentage of income, as adjusted for cost of living.

Here’s a nationwide map of citywide debt-to-income ratios. The darker circles represent the cities with the highest student loan debt. The residents of these areas are the most overleveraged on student loan debt in comparison to income. 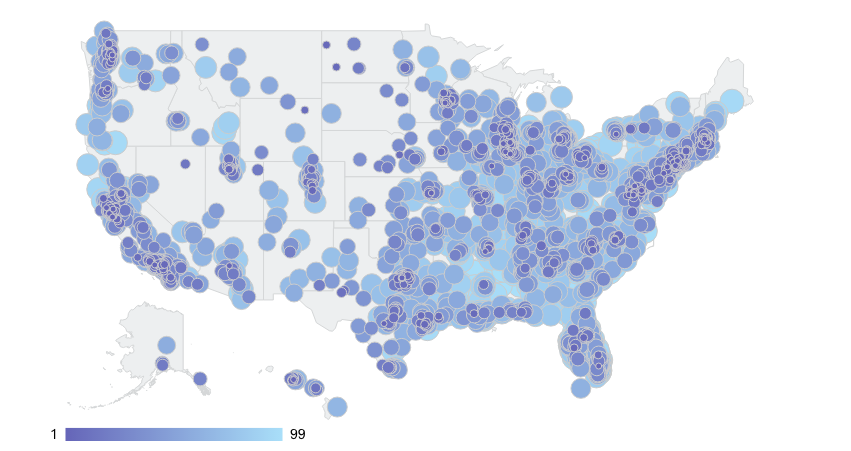 The Department of Education reports that approximately 22 million Americans have student debt. An estimated 9.6 million (44%) of student loan borrowers are either delinquent on payments or have stopped paying altogether.

Borrowers with federal student loans can apply for specific income-driven repayment (IDR) plans. An IDR plan might allow you to lower your monthly payment to an affordable amount based on your monthly income. Unfortunately, the CFPB recently found servicers engage in unfair practices of denying IDR applications that should have been routinely approved. Moreover, in many cases, IDRs do not produce significantly lower monthly payments.