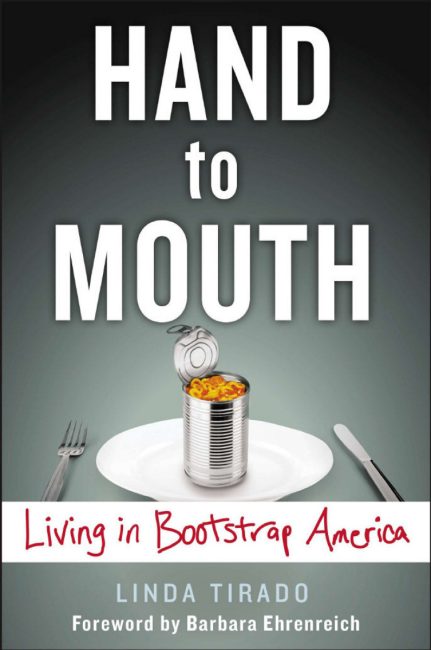 Linda Tirado’s 2014 book “Hand to Mouth: Living in Bootstrap America” is an open letter from the American poor to the middle class.

While careful to note that Tirado speaks for herself alone, she anecdotally confirms the study’s results. Tirado has lived in poverty most of her adult life. And she has some salient advice for the middle class about how to make things easier on the American poor.

Living Hand to Mouth in America

Tirado notes that situations that are “simple annoyances” for people with money are “absolute crises” for everyone else. For the poor, a small money problem or miscalculation can lead to another and yet others. Suddenly, a “small” problem like a car repair can set off a Rube Goldberg device and now you’re late on the rent.

And Tirado is sick of taking advice from the middle class on how to survive poverty:

I once read a book for people in poverty, written by someone in the middle class, containing real-life tips for saving pennies and such. It’s all fantastic advice: Buy in bulk, buy a lot when there’s a sale, hand-wash everything you can, make sure you keep up on vehicle and indoor-filter maintenance.

But all of these things cost money. It actually costs money to save money, as Tirado knows too well: “Let’s also talk about the ways in which money advice is geared only toward people who actually have money in the first place.”

Living on a financial edge for too long can lead anyone to feeling unstable, unpredictable. Tirado speaks to just how “impossible it is to keep your life from spiraling out of control when you have no financial cushion whatsoever.”

A salve to the desperation Tirado describes may be easier to administer than the problem first suggests. Tirado thinks the working poor seek foremost simply a modicum of mutual respect. She opposes “the sort of capitalism that sucks the life out of a whole bunch of the citizenry and then demands that they do better with whatever they have left.” The American working poor are, after all, doing the necessary grunt work to keep our economy moving along. “If we could just agree . . . that there is dignity in that too, we’d be able to make it less onerous.”

More plainly, Tirado tersely suggests to the middle class: “Stop being a dick to service workers whenever possible.”

The American Poor and the Fast Food Industry

Tirado worked in various capacities in the service industry. She knows what it’s like to work in a fast-food restaurant.

What I don’t understand is why people who walk into a fast-food restaurant often seem to think I should put on the same smile and elegant demeanor they could expect at Saks or the bank where they put their money. I think the sorts of people who honestly think that service workers should be more smiley and gracious just don’t get it. They don’t get it because they can take so much for granted in their own lives — things like respect, consideration, and basic fairness on the job. Benefits. Insurance.

They don’t understand how depressing it is to be barely managing your life at any given moment of the day. So forgive me if I don’t tell you to have a pleasant day with unfeigned enthusiasm when I hand you your fucking hamburger. You’ll have to settle for the fake sort.

Maybe feelings are something that only professional people are allowed to have.

Tirado asks us to acknowledge the “reality for millions of us, the people who are looking grumpy behind the counter. Our bodies hurt, our brains hurt, and our souls hurt. There’s rarely anything to smile about.” Tip your waiter.

Class Insecurity: We All Run the Risk of Living Hand to Mouth

In “Hand to Mouth,” Tirado paraphrases John Steinbeck: The American poor doesn’t really exist; only a entire population of temporarily embarrassed millionaires. Despite frequently intemperate rhetoric suggesting otherwise, the American poor don’t choose to be so. The so-called “welfare queen” dilemma has been repeatedly, statistically, and scientifically debunked. America’s trepidation toward its lower classes runs much deeper than the equitable notion of being taxed to pay for the benefits of other. It has to do with class insecurity.

A study by the Urban Institute found that over 60 percent of Americans between the ages of 25 and 60 will experience poverty at some point in their lives. And while many come out of it quickly, about 25 percent do not. The study also found that the longer you stay in poverty, the harder it is to get out.

Tirado’s missive recalls Paul Fussell’s 1983 sharp sizing-up of the middle class in his “Guide Through the American Status System.” Fussell finds in America an “exemplary fusion of insecurity and snobbery, the one propping up the other, to produce that delicate equilibrium which sustains the middle class.” We’re all afraid, in other words, of losing station. “If you find an American who feels entirely class-secure,” Fussell writes, “stuff and exhibit him. He’s a rare specimen.”

Our class insecurity is not ill-founded. We all, in fact, run the risk of living hand to mouth. We would do well to recognize the financially precarious conditions faced by millions of American families every day.