The HBO documentary Class Divide examines wealth disparity in the West Chelsea neighborhood of Manhattan in New York City. Specifically, the film toggles between the very wealthy young students of the Avenues School and the very poor living right across the street in the public housing project Elliott Houses.

The Avenues represents an international style of schooling. Their students are very intelligent in addition to being very rich. But across the street, Elliott Houses sits in the midst of the projects. And people routinely get shot, and whole families go without food or hot water. The children who live there are also very smart. But they obviously lack the resources of the kids across the street. 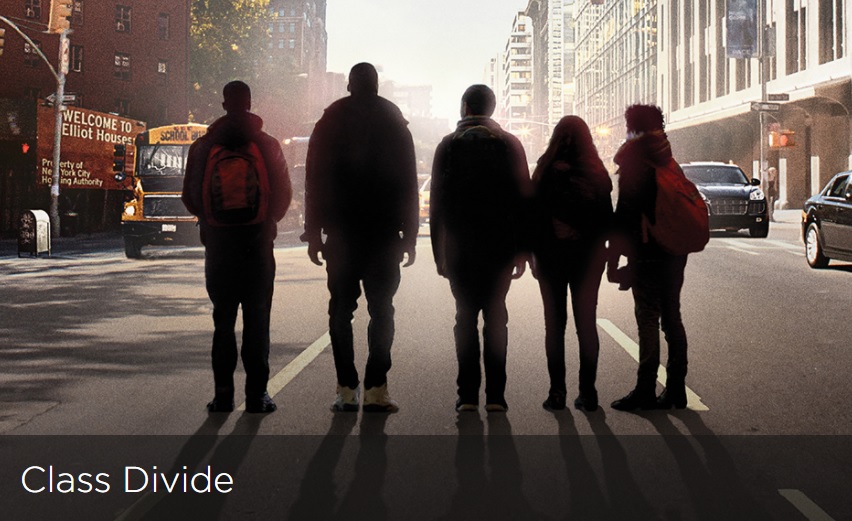 The Avenues and the Elliott Houses

The youths in the film occupy the same neighborhood but inhabit vastly different worlds. Plainly stated, the students who attend the Avenues are wealthy. Only a slender percentage of students receive scholarships to the for-profit private Avenues, whose tuition in 2015-2016 was $45,350 for pre-K to 12th grades.

By contrast, the average household income of residents of the Elliott Houses in 2016 was $21,000 per year, and unemployment rates were about 21 percent. The children living in Elliott Houses attend public school. In fact, the majority of public school students in America are from low-income families.

Take Rosa, for example, who lives in Elliott Houses. She would love to attend Avenues School, right across the street, but of course cannot afford it. She hates money: “I hate hate hate money. People fight over money. Money was made by the devil. I never heard God say, ‘You have to pay for this.'”

Compare Rosa to Isabella, a student at Avenues, who comes across as owning a certain comfort with money that cannot be taught except from birth. “Just being upper middle class is something that a lot of kids have in common” at the Avenues, she tells us. In fact, like Isabella, all of the fabulously wealthy children at Avenues comprehend the concept of wealth itself more fully.

Unfortunately for Rosa, it is harder for children born in America to move out of poverty than it is for children in most other developed countries. But, of course, Rosa is not alone.

Class Divide also tracks the development of the High Line, a beautiful outdoor elevated 1.45-mile outdoor walkway in West Chelsea The High Line was built on the remnants of a N.Y. Central viaduct section called the West Side Line, an elevated railway that was actually quite dangerous and killed 436 people between 1852 and 1908.

Rents are out of control anywhere near the High Line. Individual swimming pools in each unit. Car elevators that bring your car up to your apartment. 40 percent of these units are sold to foreign investors.

But West Chelsea itself was once industrial, gritty. Nabisco invented the Oreo and Lorna Doone there, and there were paper warehouses, and the docks. Working class people founded West Chelsea. But like the meatpacking district in the 1990s, West Chelsea has been rapidly gentrified over a short period of time, starting in 2005. In fact, while NYC lost 40 percent of its low-income housing over the last decade, since 2009 the average rent in Chelsea rose almost 10 times faster than all of Manhattan.

Many people have been lost, forced out, left behind. The worldly, urbane Avenues School seems almost purposefully situated to educate its privileged students on the class divide, the more exclusive side of which they occupy.

Class Divide represents classism in microcosm. In reality, these deep rifts exist in tens of thousands of neighborhoods across America. Race is a certainly a component of our division. But it’s not just about racism. And it’s not even about gentrification.

The division that exist between The Avenues and Elliott Houses is about classism. It’s about wealth, pure and simple. It’s about the enormous disparities in opportunities available to children of apparently similar ability. It’s about the limitations of meritocracy, and the advancement of mediocrity. The film leaves us with a quote from Plutarch: “An imbalance between rich and poor is the oldest and most fatal ailment of all republics.”