A Report on the Economic Well-Being of U.S. Households (May 2017) by the Federal Reserve offers some key insights into the economic status of American consumers. The report makes several striking findings about student loans and financial well-being.

The report found that, in large numbers, young graduates struggle to pay their loans and maintain basic living standards. Student loan borrowers are twice as likely to hold multiple jobs than those without student loans. And 73 percent of young college grads with student loans are struggling financially, compared with 45 percent of college graduates who graduate without loans.

Almost 40 percent of adults under the age of 30 have student loans. And 38 percent of Americans with outstanding student loan debt are still in deferment. They’re not even yet making payments on their loans.

Young grads are not the only ones burdened by student loan payments. Roughly 20 percent of adults between 30 and 40 also have student loans. And between 2003 and 2015, student loan debt held by senior citizens more than doubled.

College is more expensive for those who can least afford it

Nearly half of adults who attended a for-profit institution say that they would attend a different school if they could make their educational decisions again.

Report on the Economic Well-Being,
Federal Reserve Board of Governors

Default rates for graduates of for-profit institutions are also higher (22 percent) versus public (6 percent) or nonprofit (8 percent) colleges and universities.

Is the debt worth the education? Only 51 percent of student loan borrowers aged 25 to 39 say that the lifetime financial benefits of their degree outweigh the costs. That’s no better than a coin toss. 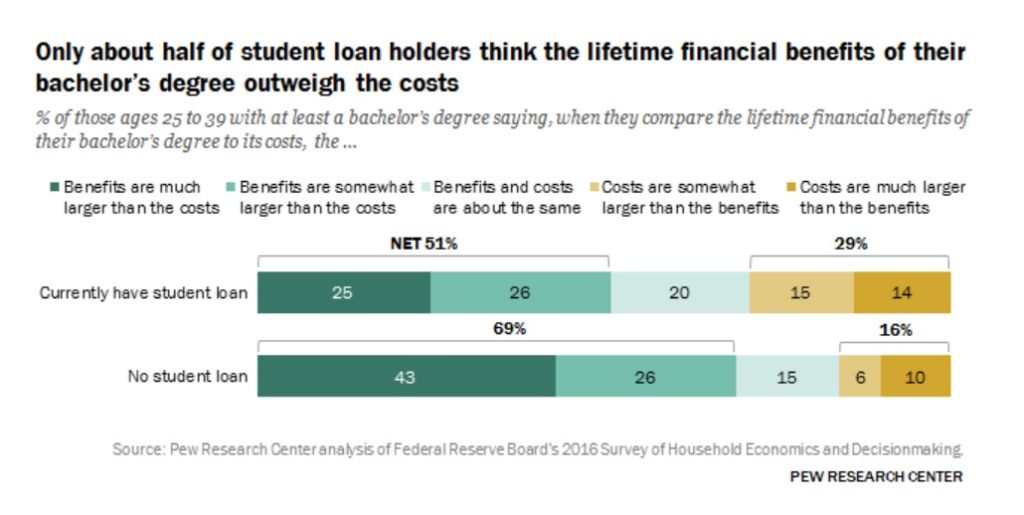 Washington, D.C. and Maryland are the top two states with the highest outstanding student loan debt. The average debt per student loan borrowers in Virginia is $28,751. If you are experiencing difficulty keeping up payments on your student loans, call us to discuss your options.