Playing right now on Netflix is the 2013 documentary film Inequality for All starring Robert Reich, who was Secretary of Labor under Bill Clinton. Throughout the film, Reich challenges the specious notions that everything the government does is bad and that everything that the market does is good.

The rich spend too little

Reich walks us through how Wall Street crashed the economy in 2008 and how we’ve come to the lopsided distribution of income and wealth we have in America. Today, the richest 400 Americans have more wealth than half of the population of the United States.

The problem is not that the rich spend too much of what they make. It’s that they’re spending too little. Instead, they save it. That does not help the economy.

The wage gap and income inequality 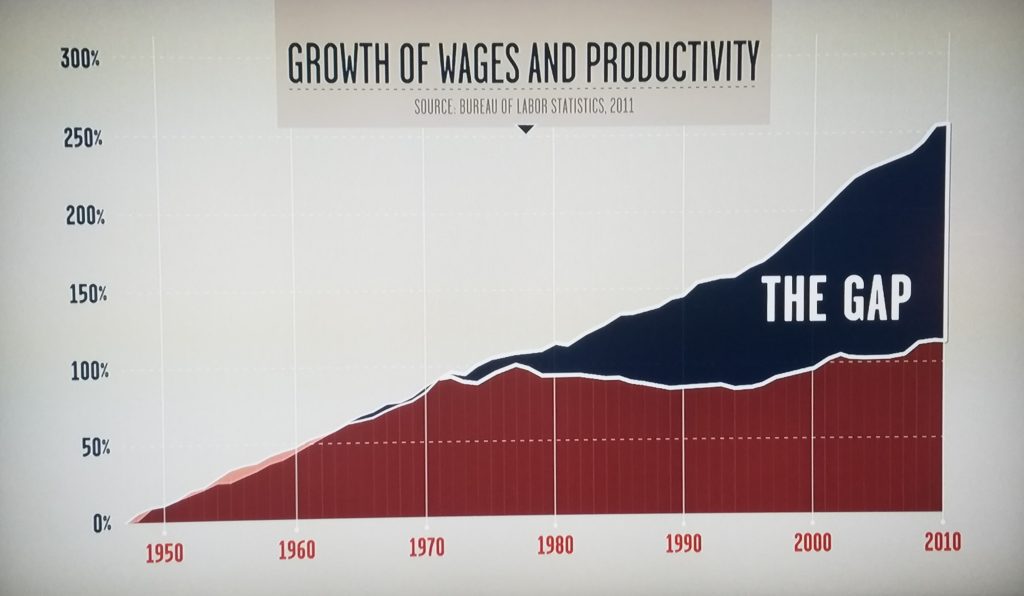 Manufacturing moving abroad, industry deregulation allowed corporations to take more chances with public funds, financial markets become more powerful, and labor union membership declined. And while much hay has been made about the dual forces of globalization and technology, these haven’t reduced the number of jobs available to Americans. Instead, these transformations have simply reduced their pay.

Just look at the “income inequality suspension bridge” from 1928 to 2007, derived from research by Thomas Piketty. The graph shows the breathtaking parallels between 1928 and 2007. Since then, the share of income going to the top one percent has only accelerated. 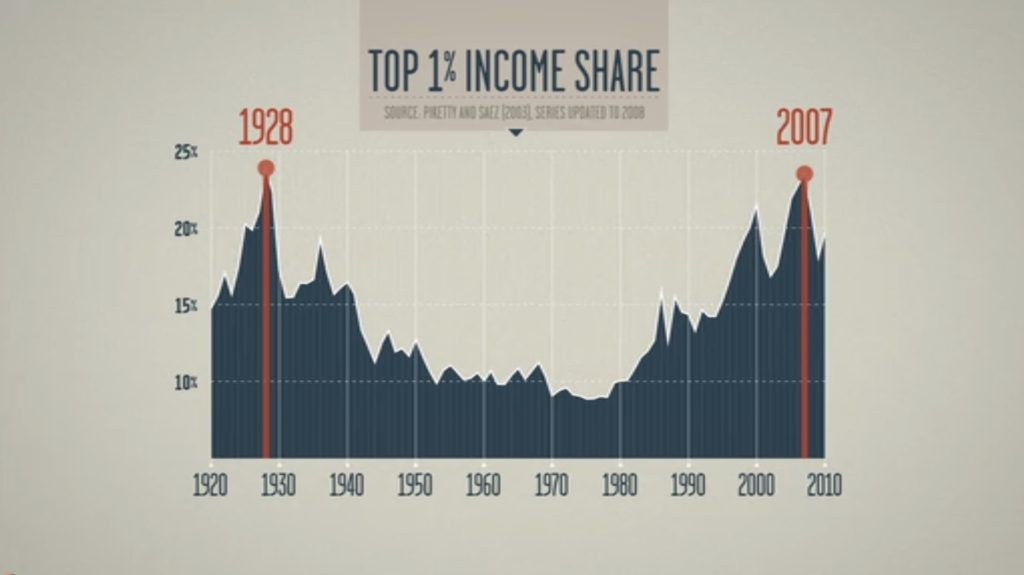 As long as there’s upward mobility, then there’s no problem with wealth inequality. But 42 percent of children born into poverty will stay there. Wages are stagnating while costs are rising. Middle class share in the national income have now reached historic lows.

Income inequality and the undermining of democracy

Reich also delves into Citizens United and how money influences our democratic process. The wealthy have entrenched into the political process the notion that money equals speech. Lobbying, the abuse of wealth, and control of political processes are today considered the norm.

It’s a vicious cycle.
Over the past 35 years,
most of the economic gains
have gone to the top,
not to the middle,
and certainly not to the poor.
[And the rich then]
spend that money
in order to get public policies
that help them become even wealthier.

But it doesn’t have to be that way. Historically, taxes on the top were never below 70 percent before Ronald Reagan. And tax rates on the wealthy have been lowest when income inequality was highest. The wealthy are not paying their fair share.

More and more today, wealth is becoming concentrated in the financial sector. In these cynical times, we run the risk of class war. As things stand, we are creating a two-tiered society between the haves and have-nots.

Yet the truth is that the rich do better when the middle class thrives. And, as Reich points out, more equitable policies would produce the ancillary benefit of not having the wealthy being hated by the majority of the country.